Enjoy modern urban life with convenient and easy connections to the existing downtown district of District 1, just 5 minutes away. Immerse yourself in the dynamic, bustling life of the day so that every day is always an exciting adventure. Dynamic economic life with busy commercial and service area. A convergence place for global businesses and international financial institutions. All present at a single address – Empire City. An unlimited workspace, a business connection center, full convergence of commercial functions, outstanding services and optimal traffic connection with the existing city center.

Empire City owns an endless utility space, designed for everyday life to be more valuable. Immerse yourself in the cool water and swimming pool overflow 50m. Passionate on exercising at the multi-purpose gym. Or hang out with loved ones with a variety of entertainment options. The fun is endless! With open, seamless utility space from indoors to outdoors and large green spaces, helping to rejuvenate all senses right in front of the house steps. Live every second in Empire City. Empire City is a destination that converges all the quintessence of modern urban life. From quintessential culinary experiences from around the world to global brands and exclusive services. The world is right at your doorstep. The 88-story tower will include luxury apartments, luxury hotels and a public observatory. A “Cloudy Garden” with a winding structure will cut the tower vertically in the middle of the sky, bringing the whole green landscape up in the air.

Empire 88 Tower, part of the Empire City project, is a spectacular high-rise complex with plenty of community spaces. The tower was built with the ambition to become one of the iconic architectural works of Ho Chi Minh City, drawing a vision of the resonance capacity between nature and living space right in the heart of the bustling city. melancholy. With the charming interaction between the exterior and the interior, Chan May Garden will be an exciting experience journey with the typical tropical landscape of Vietnam. At the top of the tallest tower, The Cloud Space will end the vertical journey of the tower and open up an open space for the community where it can be flexibly customized for events and literary activities. honoring the beautiful view of the bustling urban landscape.

The most important part of the Empire City complex is Live. Empire City forms 7 regions with different names. In which there are 4 specialized areas for residents (Linden, Narra, Tilia, Cove): each area contains 2-4 towers. Therefore, it is expected that this will be a unique work in terms of convenience and area.

Overview of the Empire city project 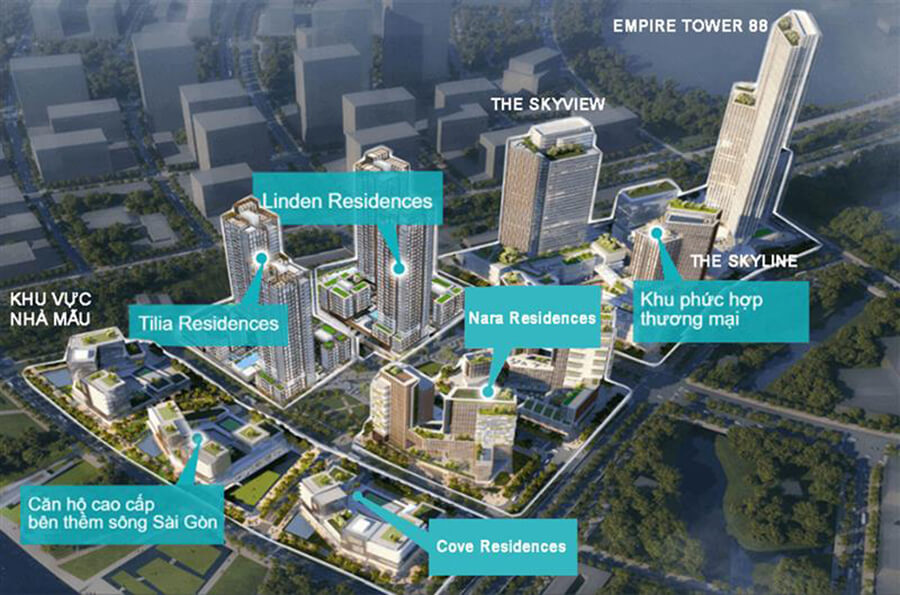 On the other hand, Empire City has a good convergence of the element of an area with good feng shui! Near cities, rivers, roads, and infrastructure are being developed at an incredibly fast rate! Expected in the future, Empire City will be a complex comparable to Thao Dien.

Each apartment complex in Empire City has convenient high-end amenities.

The luxurious, comfortable, Western-style Empire City design is the basic feature of the apartments in Empire City